Brother micro-chip their cartridges to gain back market share 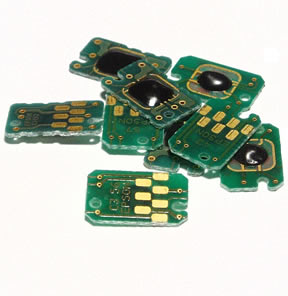 In what appears to be an attempt to win back some of it's market share Brother has started to micro-chip all of their new ink cartridges.

Up until recently all Brother Inkjet Cartridges never sported a micro-chip and simply relied on the printer to detect all of the information about the individual cartridges including ink levels, colour and compatibility.

Although this old method was relatively archaic it actually worked well.

There is no doubt however that like all other printer companies Brother also is feeling the brunt of the exploding generic cartridge boom and is desperately trying to fight back !

The micro-chip is not something new to inkjet cartridges as all other manufacturers have been using them for years. The big issue with Brother however is that they seem to be going down the exact same pathway which Epson did over the past decade or so.

This is EXACTLY the same tactics used by Epson over the past decade which has almost ruined Epson's reputation completely.

By continually updating firmware and tweaking their printers both Brother and Epson seem to think that people will turn back to using only genuine cartridges. This however is definitely not the way to win back consumers as it only frustrates them and at the same time tarnishes the printers reputation.

So can I use non genuine ink in the new Brother printers? The answer to this is YES you certainly can however you need to be certain that whoever you purchase them from has cartridges with the very latest updated micro-chip attached.

Just to give you an insight into how it works we (Ink Hub) purchased a large amount of the new Brother 133 and 135XL Generic inks when they were first released and within 2 months we binned the whole lot and imported all new cartridges with the updated micro-chips. This was done simply to make sure that our customers received cartridges that will DEFINITELY work in their new Brother printers without any warning or error messages.

So should I avoid Brother Inkjet Printers ?

The answer to this is a big NO! Brother Inkjet printers in general are extremely good, reliable printers for home use and small business and are extremely economical to use (if using compatible inks).

We refer to them as the "Workhorse" of all printers as they just keep going and rarely give you any problems. The only thing to keep in mind is that you need to make sure that your ink supplier stocks the non genuine inks with the latest version micro-chip. As long as you keep this in mind you should have many trouble free years of printing.