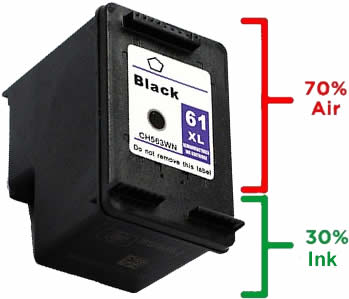 Ever bought a bag of chips, opened them and realised that you've just paid for a bag which contains about 60% air ? Well apparently the big guns from Epson, Brother, HP and Canon have had a meeting with the CEO from Smiths Chips and have decided to do the same with their cartridges !

OK maybe thats not the full truth however the basic concept is the same. That is Ink Cartridges are getting smaller, containing less ink and the retail price is increasing. Lets take a look at some of the worst culprits. The picture above is a typical HP Black cartridge which although physically large often only contains as little as 5ml or so of ink. They usually have 2 different options per printer - The XL which is a high yield and contains more ink or the standard cartridge which is very low yield.

Both cartridges look identical however one has  around 2.5 times more ink and costs twice the price. A rip off you say. Of course it is but hey they'll tell you that if you use a compatible ink your printer will self destruct or else your warranty will be void or some other baloney.

All of the major companies are doing this and really the only way to avoid the ever increasing costs of printer consumables is to do your homework and buy a printer which contains SEPERATE tanks for each colour. Also check that compatible cartridges are available to suit the printer you purchase.

We get calls constantly from people who have gone into their local store and seeing the beautiful, gleaming printer on display for only $39 cant resist taking it home. When the introductory inks which come with the printer run out 3 days later they're on the blower looking for inks to get their new machine up and printing again.

When they find out they're up for maybe $60 to as much as $150 for the replacement inks suddenly this once adored new printer is now a rotten mongrel of a thing. The person then logs onto Facebook or Youtube and starts telling everyone not to buy a $#@)*& printer or whatever brand it may be.

If you want to avoid the above scenario and are completely baffled by the great number of choices simply call us at Ink Hub and we can advise you on the most economical printer to suit your printing needs.