The ultimate guide to inkjet printers 2016 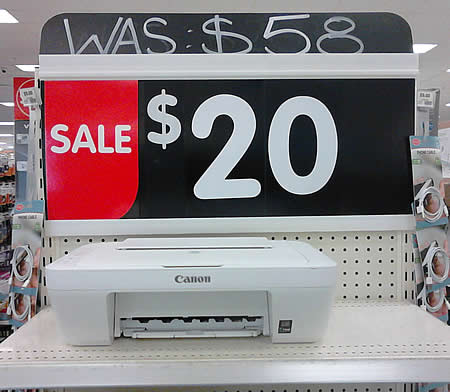 Are you in the market for a new inkjet printer? Before making the final decision have a read of the following article so you can make a more informed choice.

Having been in the printer consumables industry for the past 10 years you become very aware of the ongoing tactics of the various printer manufacturers. Although the printers may have changed the deceptive ways of the printer companies are no different to the way they were 10 years ago.

I was down at Big W this morning and thought I'd take a few snaps to back up my previous comments. The printer to the left is the Canon MG2560 Inkjet Printer usually retailing for $58.00 but at the moment it's on special for a low $20.00. Wow only $20.00, what a bargain!

I wish I had a dollar for every time I've had a call from someone with one of these "Bargain" printers who is ready to blow a fuse over the price of the replacement ink cartridges. I know this is nothing new but unfortunately people just keep making the same mistake over and over again.

I compare this to the people you see in the mall playing on those stupid "Skill Testers" where they pay two bucks a go to try and win a two dollar fluffy toy for their kid. Iv'e seen people go through ten or more dollars trying to hook a two buck fluffy toy on a fragile crane and then walk off shaking their heads amazed that they didn't win something! 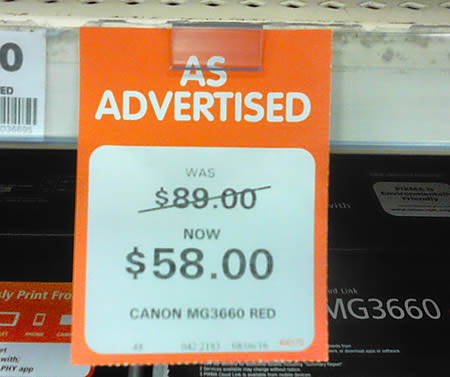 The fairest printer of them all

While still in Big W I stumble across the next little bargain sitting proudly in front of the other printers with another bargain price tag.

This time it's a Canon MG3660 printer and it's a little more expensive ($58.00) but still too good a bargain to just let go. Unlike most other printers the Canon MG3660 is a really shiny, bright red colour, it's so pretty.

I was in the shops recently and I saw a family looking at this exact model printer and I tried to steer them towards another printer with similar features which uses much cheaper cartridges.

I was stunned when they stuck by their guns and chose the lovely red shiny printer with no consideration at all of the running costs. Who could resist the shiny red finish on this eye catching printer. Let's worry about running costs some other time. I hope these folks are still as happy when the time comes to replace the inks in this printer. At a crazy $80.80 cents for the two replacement cartridges I think the lovely red printer may end up getting launched out the back door.

At last we have a winner!

Moving further down the printer isle in my tour through Big W I see another printer that catches my eye. This time I like what I see.

The printer is a Canon MG5760 print, scan and copy and the price is a bargain $79.00. This time it actually is a bargain that is if you are willing to use MG5760 compatible ink cartridges.

Unlike the previous two printers the MG5760 uses five separate ink tanks and they only need to be replaced individually as they run out. Doesn't this make much more sense? On a cost per page basis these printers are perhaps as economical as any printer on the market. Couple this with a Thermal Printhead which is very unlikely to clog and also the fact that Canon printers run like a dream on generic cartridges and you have a definite winner.

Tips on buying a Inkjet Printer

As stated previously I have been in the Inkjet Printer industry now for 10 years and I am dealing with customers everyday and sorting out issues with various printers. I will list some facts which I hope will steer you in the right direction when selecting your next inkjet printer.

1. Listen to people in the industry who are here to try and help you to chose a printer which will serve you well and be cheap to run. I cant stress this fact enough as we are dealing with printers all day long so PLEASE take our advice!

2. NEVER EVER buy any printer which utilizes only two cartridges! These cartridges are always expensive to replace and as stated previously the tri-colour cartridge must be replaced as soon as one of the colours runs out. Don't be fooled by the initial cheap price of these printers as they are simply a rip off!

5. If you want a printer that will work perfectly with generic cartridges and will not be affected by auto software updates which are designed to prevent the use of generic cartridges stick with a Canon printer. Canon are the only company left that are not using these tactics. Epson and Brother are currently updating their firmware so often that it's ridiculous.

A final word of advice

If you are still undecided on what inkjet printer to buy then here's some final advice. Most of the time you will be safe buying any of the Canon Inkjet Printers which use five individual cartridges. Some Canon printers also use a Grey cartridge, try to avoid these models as the Grey cartridge does nothing but cost you extra money.

The next choice I would go for is any of the Brother Inkjet printers. These are also quite reliable and cheap to run if using generic inks. The only issue with the latest Brother printers is the continuous software updates that Brother are using to slow down the use of generic inks.

Once the new software update is installed then the generic inks no longer work. In saying this we always get updated generic cartridges which overcome these issues but it can be a pain in the neck during the interim time.