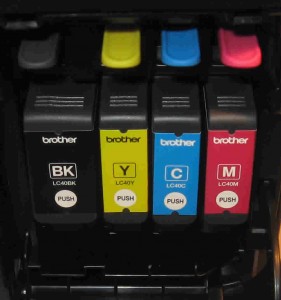 Have you ever tried installing a new Cartridge into your Brother Printer and it tells you that it cant detect it? This is not uncommon and usually it has nothing to do with the ink cartridge itself.

Most Brother Printers (up until early 2013) use 2 small infa-red beams which detect the ink levels and also wether there is in fact a cartridge installed in the printer.

Unfortunately due to a number of factors sometimes the printer doesn't detect that a new cartridge has been installed.

In the event that the printer doesn't detect that you have replaced the cartridge simply remove ALL cartridges and one by one install them again. After installing each cartridge  and closing the door you should be prompted by the printer eg: Did you replace the Black Cartridge ?

In each case simply press YES and continue re installing the cartridges one at a time using the same process. If you find that this still doesn't work then with all of the cartridges still installed, unplug the printer from the wall for 20 mins and this will reset the memory.

If this still fails on some of the newer Brother printers then it can be caused by a jammed float in the ink level window. These  Ink cartridges have a small float which sits on top of the ink within the small window at the front of the cartridge and if this is jammed or faulty this problem can occur. (Note: this is a very rare occurrence however it has been known to happen).

Usually Brother printers are trouble free however there is always the isolated case of the above problems occurring and as stated above can be easily fixed !

Update: If you have a later model Brother Inkjet Printer (2014 or later) the cause of the "Ink Cannot be detected" error message may be due to an out dated or faulty micro chip. The following article may be of interest to you if you have one of these newer Brother printers.