Epson has just released another update for many of their printers ( October 2019 ). Once again these updates do absolutely nothing at all to improve the printers performance as they are purely done to stop the use of Generic cartridges.

If you follow the instructions given in this article then you can continue using your non-genuine inks without any problems. If you don't turn off the updates then your current batch of cartridges will be rendered useless. This is an ongoing battle between printer manufacturers and generic cartridge re-sellers that will most likely never end.

Ink Hub has already approached the ACCC on several occasions about this practice but unfortunately it has fallen on deaf ears. We believe that the end user has the rights to use a cheaper priced consumable and should not be held captive by these big corporations who continue to exploit the consumer.

Note: Although the below diagram indicates that it is for the Epson XP430 it is the same process for all of the latest Epson printers. 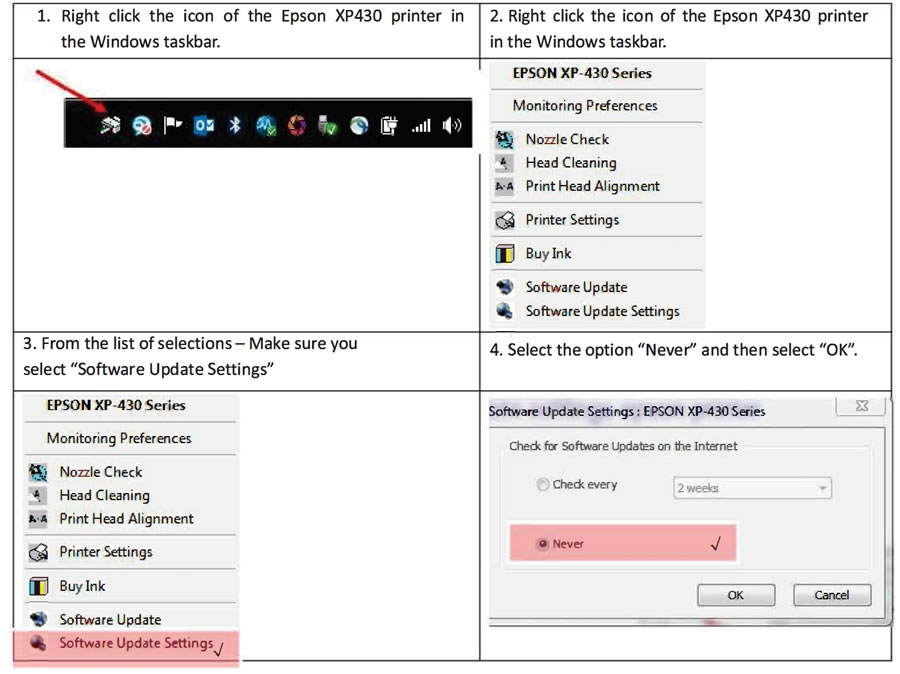 More help on turning off updates

If you need further help on how to turn your printer updates off then take a look at some of the following sites:

How to turn OFF Epson Firmware updates

Why turn off the updates at all?

This is a very good question. Most people seem to have some kind of OCD when it comes to updating computer hardware. They seem to think that if they don't update their equipment then it will fail to work or eventually self destruct or something.

Even when we continually tell customers to turn off the updates and put warning stickers on our invoices and even the cartridges themselves have warning stickers on them but people still leave their auto updates turned ON. It's quite annoying to be honest.

Pretty much ALL auto updates for printers now days are designed to shut down non genuine cartridges. The printer manufacturers want to maintain their share of the lucrative print consumables market so they will continue to aggressively use these tactics. Why wouldn't they if it makes them money.

Unfortunately now their tactics are becoming more and more underhanded so if you wish to keep using generic cartridges in your printer then PLEASE turn off the updates.

Which companies are issuing the updates?

Almost all of the printer companies are using these tactics in an attempt to discourage the use of compatible cartridges. The only company that hasn't used these underhanded methods is Canon. That is one of the reasons that we recommend Canon printers to customers as they are the only ethical manufacturer that doesn't do this.

HP seem to be the most aggressive company at the present time as they are releasing update after update to most of their printers including older models. They started off by releasing updates which immediately stopped any generic cartridges that were already in the printer from working.

They were hauled over the coals for doing this so now their updates only take affect when a new cartridge is installed causing them to not work. This method seems to be acceptable to the powers that be and no one seems to want to challenge them over using these "new" tactics.

Epson are the next worse offender and they also use similar tactics as HP. Epson seem to be the company that was first to mastermind these tactics and the others have simply followed along. Brother are also doing it, their printer cartridges are all chipped now unlike the old days when for years they didn't use chips. By introducing the chipped cartridge it gives them the ability to issue updates which destroy generic cartridges the same as the other manufacturers do.

Let me finish by once again recommending Canon printers as they are the only manufacturer that is not using these "Communist" like tactics. Also Canon printers work exceptionally well with non genuine inks. Furthermore if you are using any of the other brands with generic cartridges then PLEASE turn OFF the updates.

On some of the newer model Epson printers they require you to first download the Epson Software Updater and install it before you can actually turn OFF the updates. You can download the Epson Software Updater here. Once you have installed it on your computer then you can make sure that it is turned OFF. If you follow the instructions below you won't have any issues at all with future updates. Make sure that you select "Never" from the Auto update settings. 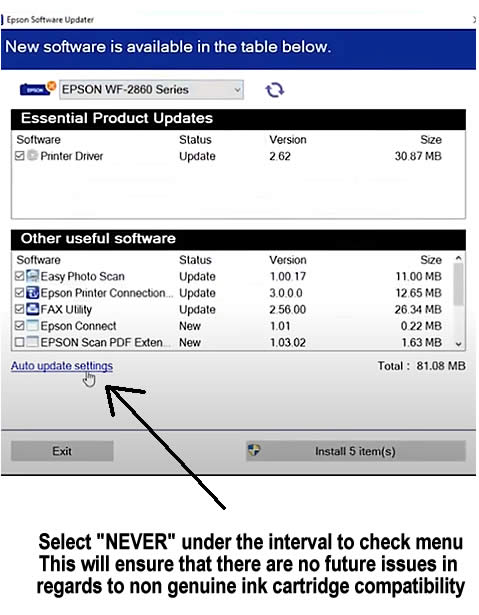