As printer manufacturers strive to stop the spread of non genuine cartridges their tactics are becoming more and more unscrupulous. What happens is the printer companies release a whole new series of printers and along with them they release cartridges for them with very high tech micro chips on them which are extremely hard to crack. As with any technology there is always someone out there with the know how to crack these chips.

Welcome the chip manufacturing company "Apex". Apex are one of the world leaders in manufacturing microchips for non genuine cartridges. Their latest chips for Epson printers are what's known as serial switch chips. Epson printers come with firmware installed that actually detects the serial code on the chip on the cartridges. If this serial code is not the correct one then the cartridge will be rejected and you will get the frustrating " Ink Cartridge cannot be detected" message.

How Epson combat the use of generic cartridges is by releasing software updates which change the detection of these serial codes and make them no longer detectable. So basically their own cartridges will obviously have the correct serial code installed and will not be rejected but the generic ones will instantly become unusable. To counteract this technology Apex has developed a chip that actually changes it's serial code each time that it is installed until one of the codes is accepted.

So basically when a generic Epson ink is installed into the printer and it is not recognized then it's simply a matter of removing it and re-installing it until an acceptable code is found and the printer accepts the cartridge. Further to this Apex has added another feature to their latest chips which when unlocked gives the user an extra serial number. The extra serial number is activated simply by cutting the carbon film on the chip as seen below: 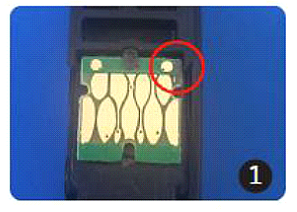 As can be seen from the diagram to the left there is a small carbon track on the very top right hand side of the chip. This is how the chip is when purchased and first installed in the machine. Initially there are five different codes available and each one can be selected simply by removing the cartridge and re-installing it. 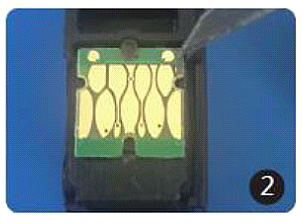 In this diagram we can see the tiny carbon track which is in tact when the cartridge is initially purchased. If after inserting the cartridge five or more times it is still not recognized by the printer then it needs to be removed. Simply use a scalpel with a sharp, pointy tip and gently remove the carbon track to release the extra code. 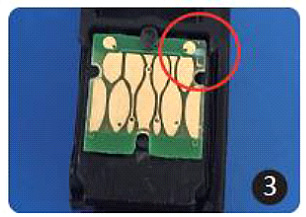 Once the carbon track is removed this releases another code and when re-installed the cartridge should be detected by the printer. Sometimes if the cartridge is still not being detected then the chip should be cleaned using a cotton bud with some mentholated spirits on it. Once cleaned re-install the cartridge and if needed do a hard reset by turning the printer OFF, unplugging it from the wall and then turning it back on some 10 minutes later. This forces the printer to re-detect all of the cartridges.

Which Epson cartridges does this apply to?

The above information applies to most of the latest Epson cartridges including: Epson 212XL, 39XL, 202XL, 312XL, 302XL, 702XL, 802XL, 288XL and 786XL cartridges. This list is only of the cartridges affected in the Oceania region of which Australia is in this region. The interesting thing about these chips is that each serial code can only be used by the printer once. If a new cartridge is installed then the serial code MUST be different or else it won't be detected. This is the reason the manufacturers change these serial codes every so often so that the end user should in theory always have at least a few new serial codes which won't have been previously used in their printer.

Like it or not this technology is here to stay and it's only gonna get worse as printer manufacturers strive to maintain their market share of the printer consumables market. HP are far worse than Epson and they are currently updating their firmware so often that chip manufacturers are struggling to keep up with them. Canon seem to be one of the few manufacturers that have not got involved in this caper. This is one of the reasons that we recommend Canon printers if you wish to use generic cartridges as they never use these underhanded tactics.

Update Dec 2020: I have been in talks with several of the largest generic cartridge manufacturers in China recently and there is an amazing new technology called UFU or Unismart that has hit the market. They now have cartridges with re-programmable chips attached. These cartridges are packaged so that the chip on them is accessible and able to be re-programmed without even removing them from their packaging.

By using this technology the reseller no longer needs to return the cartridges to the manufacturer to have the chips replaced. Instead you simply re-program each cartridge chip and it is automatically updated, it's as simple as that! Firmware updates have always been the biggest nightmare for all printer cartridge resellers and at last with this technology this massive problem may be overcome.

It is impossible to stop printer manufacturers from releasing firmware updates however with this new technology it will no longer be as big of an issue. To get a better idea of how this new technology works take a listen to Ivan from g&g image as he explains how it all works.